The new Google Pixel smartphone arrived on my door step October 21, 2016; a day after the official release. I preordered the phone the next day. As Google made the phone demonstration at their October 4 event (see video below), I knew it was time to replace my aging Nexus 6 phone with the new Google Pixel phone.

This blog post shares my Pixel phone thoughts and observations after a few weeks of use. Before you begin to read this post, check out my unboxing images for a visual description of the phone and the phone box contents. 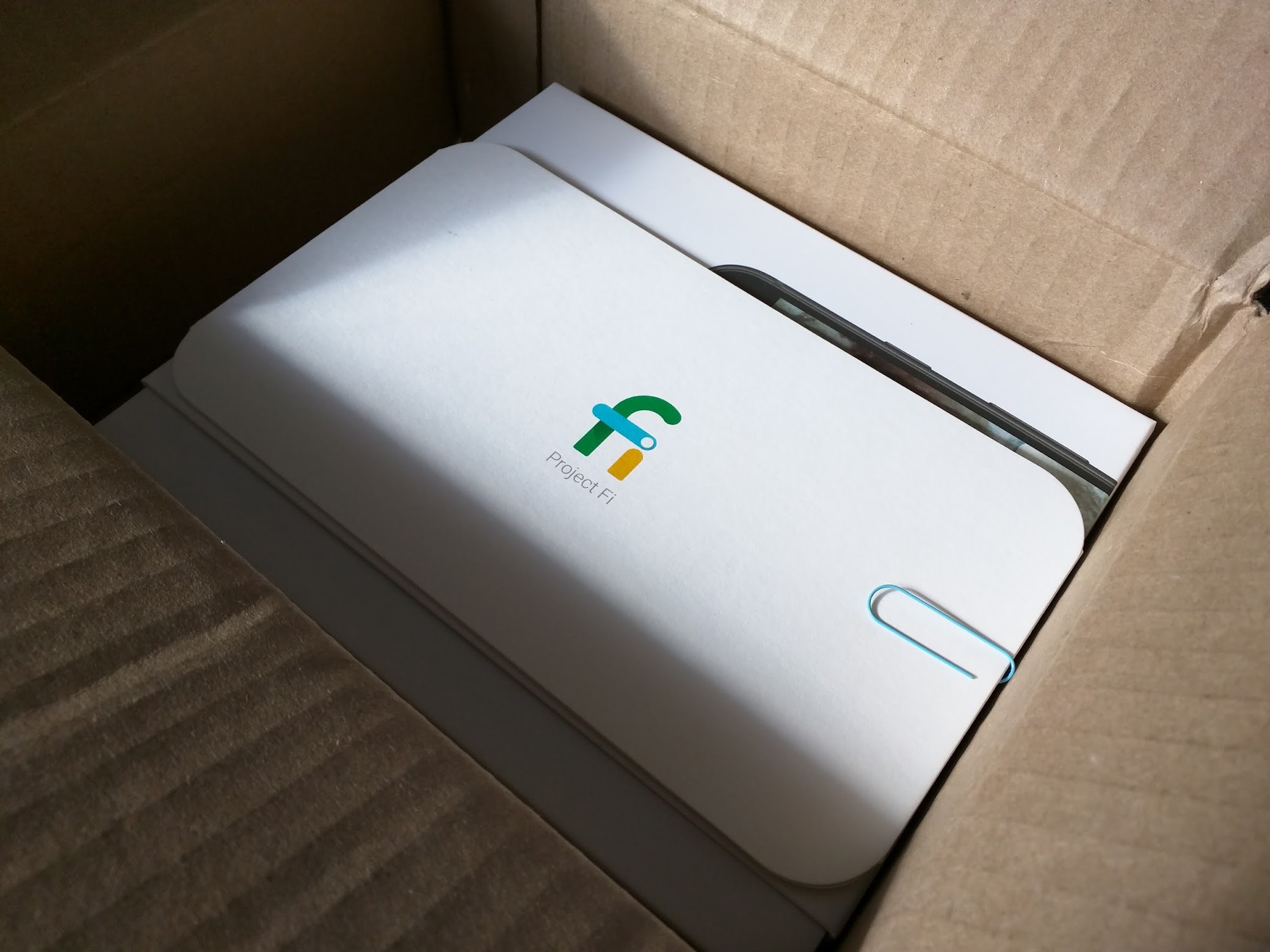 This phone uses the Google Project Fi service, not Verizon. Project Fi works for me and my average monthly cost is around $35. That would be hard to beat if I had this phone on Verizon’s network.

This is a rather long post. Below is a table of contents you can use to jump to a specific section.

The move from the Nexus 6’s six inch screen to the Pixel’s smaller five inch screen has made me happy. While I enjoy the Nexus 6 screen, the form factor is just too large to carry comfortably unless I wear a jacket. 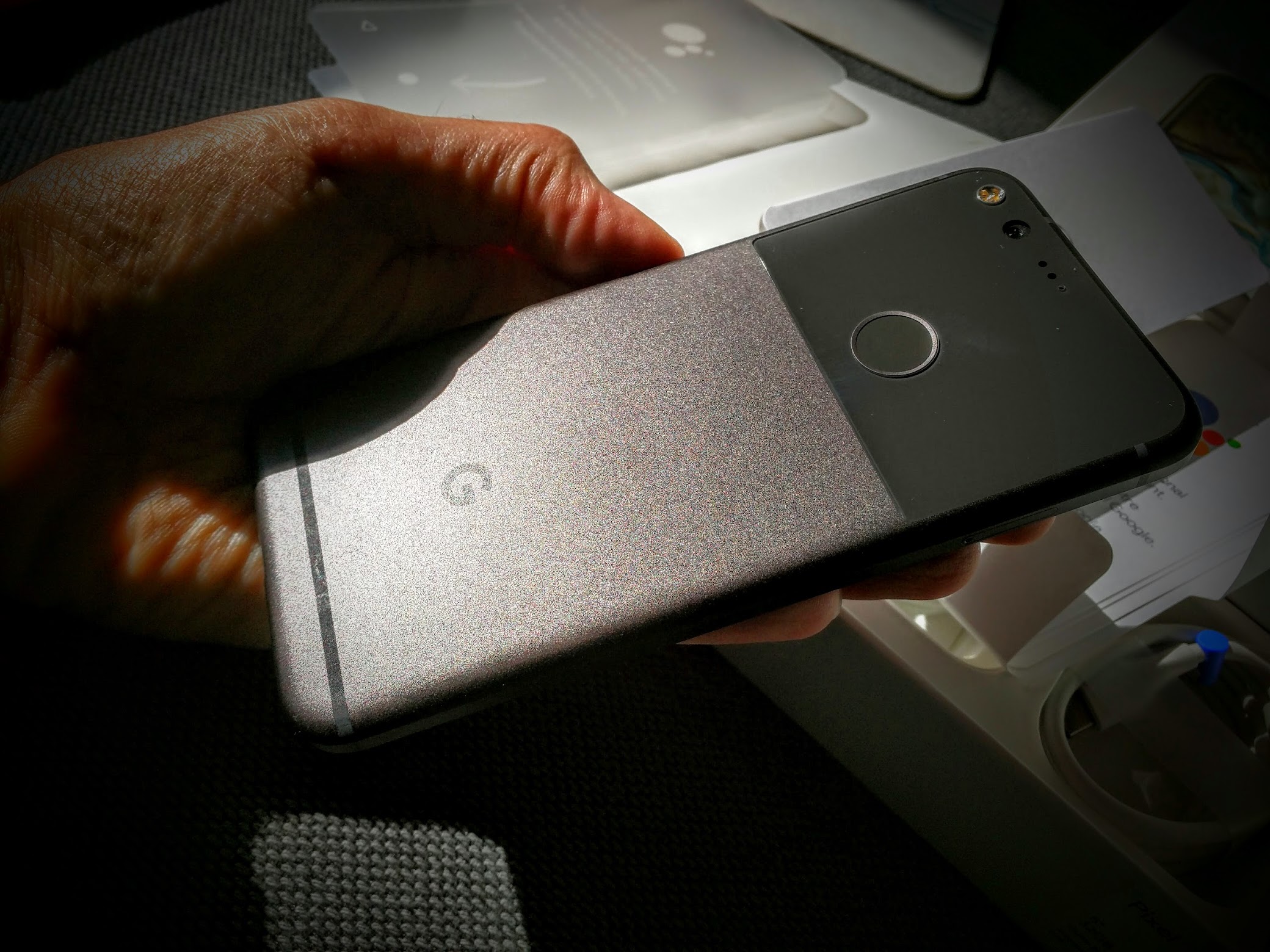 A return to the smaller screen allows me to pocket the Pixel easily no matter my attire. The larger Pixel XL’s five and a half inch screen may have been okay, but I chose to save $100 and focus on portability.

Unlike the iPhone, but like many modern Android phones, there is no physical home button on the front of the Pixel. The front is a slab of glass with ports for audio and sensors at the top. The back includes a variance of material between the top (glass) and the bottom (aluminum). I like the look; however, I use a case that covers the design.

Since the phone is new, there was little to choose from in the phone case category. I chose to protect my Pixel with a Smoke Black DGtle Shock Absorbent Anti-Scratches TPU Gel Premium Slim Flexible Soft Bumper Rubber Protective Case. The case fits and protects well for an $8.00 case. In the future, I’ll look for a slimline battery case, even though battery performance is excellent.

There is no camera hump on the back. The phone tapers a bit from top to bottom to accommodate the camera. I probably would not notice had I not read about the taper. I like the look of the phone. It’s hard for a smartphone to look unique nowadays. They all look like a slab of glass surrounded by metal or plastic.

The AMOLED screen on the PIXEL is gorgeous. Colors are crisp and bright and blacks are black. Resolution is retina (you won’t see any pixelation). Edges are sharp and video is a joy to watch, even on this five inch screen. I have yet to find a situation, either indoors or out, where I am unable to view the screen comfortably. Automatic brightness works well. It is a great screen and probably the best on any mobile device I own.

Other Android devices I use often feel laggy. The Pixel response is instantaneous. This is the best Android experience and satisfyingly like, well, an iPhone. Everything from waking the phone, via the fingerprint scanner, to firing up the camera for a picture is instantaneous. Reviewers suggest the iPhone 7 is faster and technically that may be the case; however, in my use case, I’m not sure it makes a bit of difference. The Pixel is “buttery smooth” and responsive when it matters.

The Pixel has a USB-C port for charing and data sync. Like the iPhone lightning port, it doesn’t matter which way you attach the adapter. Unlike the Apple lightning port, many devices use USB-C ports. Google includes two USB-C cables.

My Apple MacBook uses USB-C to charge. I can use the same charger for both the MacBook and the Pixel – something I cannot do with an iPhone. That just seems odd to me. In this way, my Pixel is more compatible with my Apple computer than an iPhone.

My car, a 2016 Honda Civic Touring edition, includes Android Auto. The USB-C cable, rather than the micro-USB, is more convenient and the connection between the Pixel and the Civic’s head unit is more reliable. 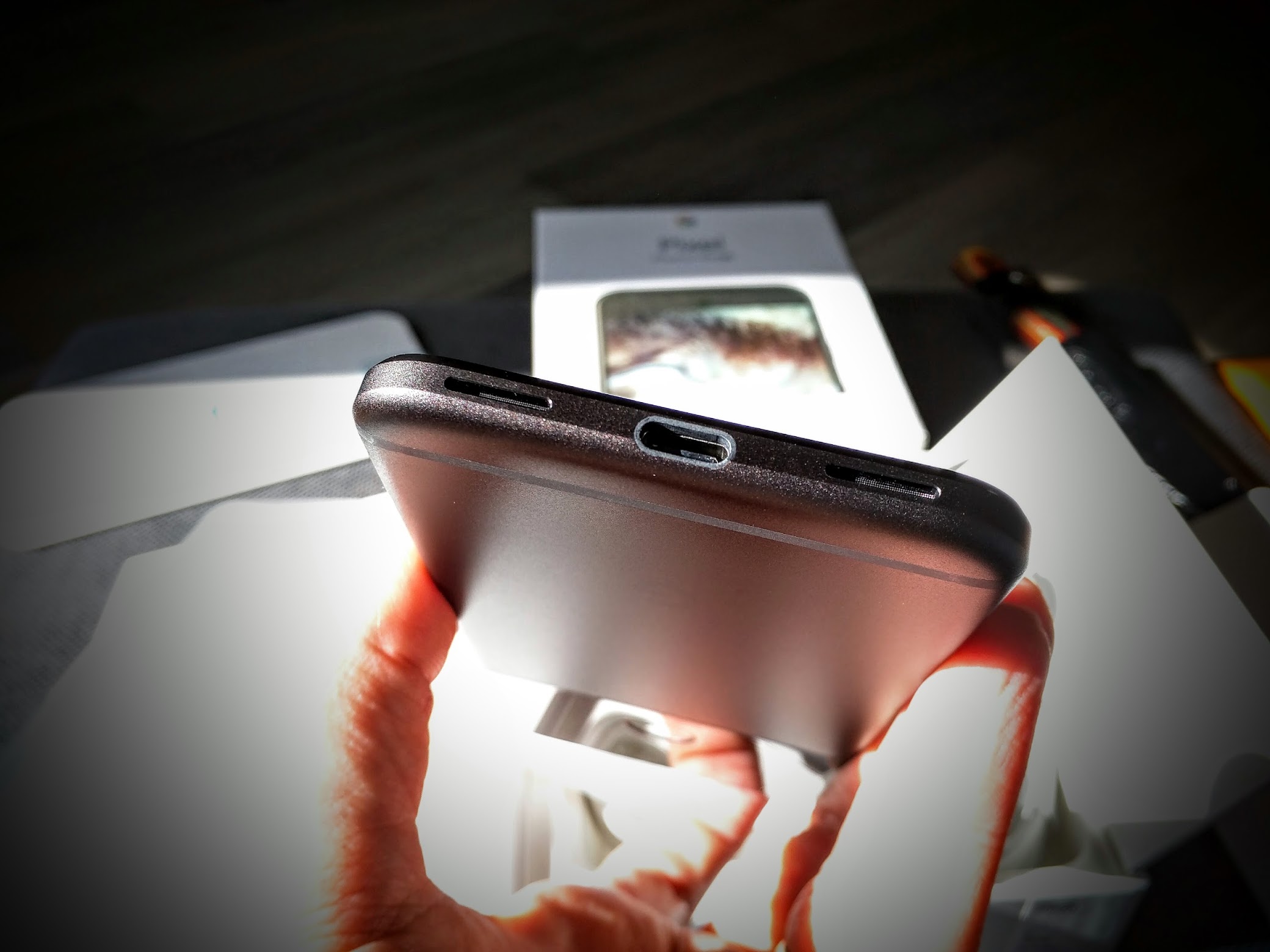 Famously, the Google Pixel still includes a headphone jack; unlike new iPhones. I gave up the headphone jack about a two years ago. When I run, I use the no longer available Mediabridge bluetooth headphones (although this rebranded pair appears to be the same). Finally, this headphone jack allows me to use the remote shutter button on an inexpensive selfie stick.

I lost the front-facing dual speakers on the Nexus 6 to a single speaker on the bottom of the Pixel. Because of the Pixel speaker location, I often find myself muffling the sound with my palm.

The speaker itself is loud and fine for vocals. I do not recommend it for music or video and suggest a good set of headphones. I rarely watch videos on my phone save for the trending YouTube or Facebook video.

As mentioned earlier, the Pixel uses USB-C to charge the battery. My Nexus 6 uses wireless charging and I miss that feature. Simply dropping the phone on my charger at night is far more convenient than plugging in a cable. It’s a loss, but one I am sure to get used to over time.

The new quick charge feature is fast. An entire charge takes less than ninety minutes and the 15 minute quick charge (for an advertised 7 hours of use) is a welcome addition to any phone. The charger itself is compact and convenient. 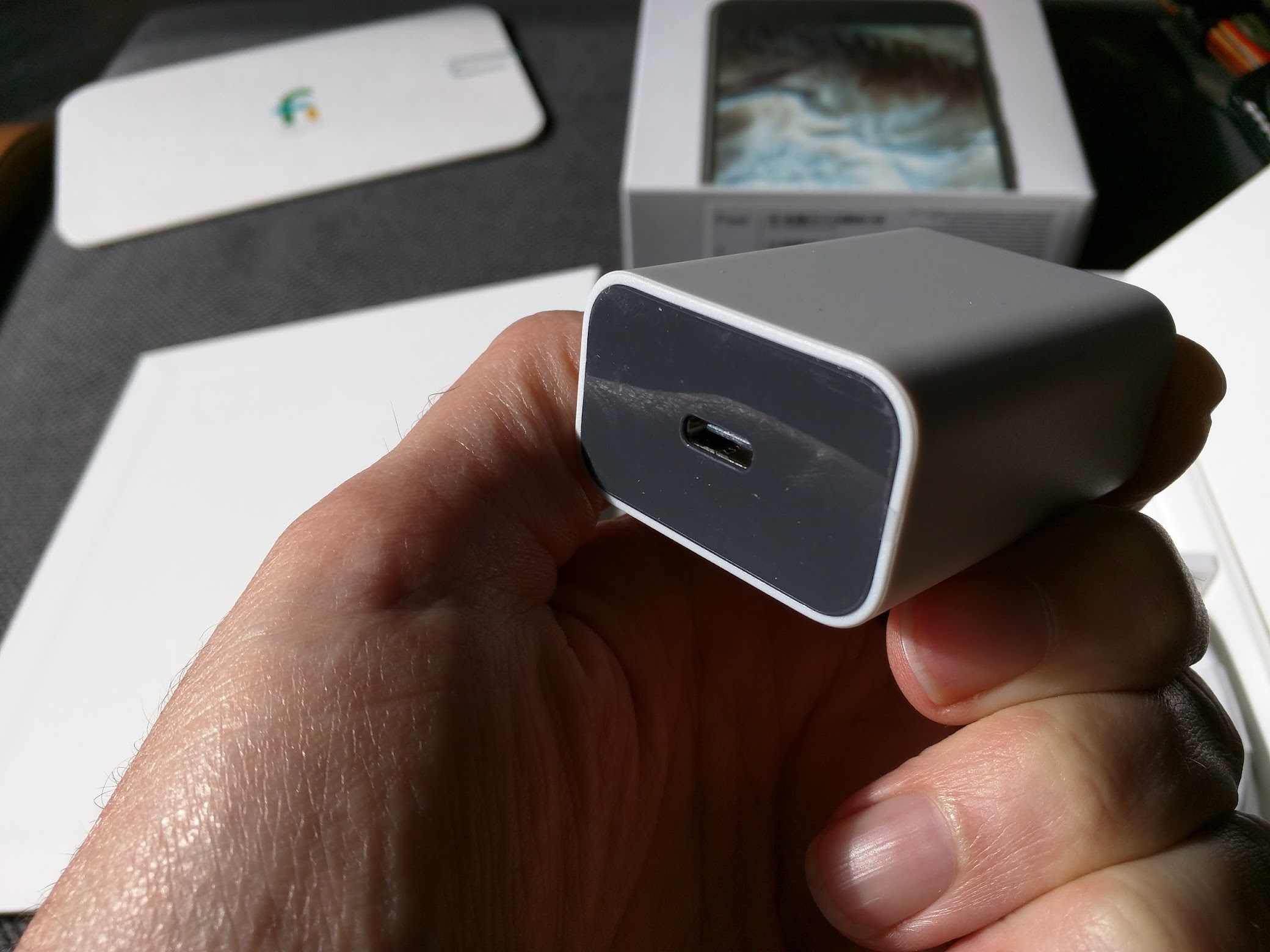 I am pleased with the battery life on the Pixel. This is the first Android device where I felt confident I could walk out of the house in the morning and, with normal use, have plenty of battery life to get me through day and evening events.

There are days when I return home in the evening to find 40-50% of battery life. This is rarely, if ever, the case with my Nexus 6. Unlike the Nexus 6, the Pixel doesn’t drain the battery when at rest.

A primary concern I have with the Nexus 6 is the camera. You can read those concerns here. The camera speed and quality was one of the primary reasons I pulled the trigger to purchase the Pixel. As is often said, “The best camera is the one you have with you.” This was not the case with the Nexus 6. I regularly missed shots because the camera app was slow to load or crashed.

The Pixel does not have this problem. A double push of the power button and the camera quickly starts up. Pictures, even in low light, are stunning. Check out this low light image taken during Halloween 2016.

I took this shot in a rush and afterwards, was surprised at the quality of the image. The only touchup was to add the vignette shadow around the image.

Video is impressive. As you will see, in this video also taken during Halloween 2016, software based video stabilization is good. I’ve never been able to shoot video this smooth from a hand-held camera.

Interestingly, when I uploaded the video to YouTube, it announced that my video was shaky and offered to stabilize it for me!

I won’t write much about Google Photos, but the integration between the Pixel, Google Photos and YouTube is the most pleasing experience I’ve had between phone camera and online photo/video services. The Pixel comes with FREE and unlimited photo/video back up in full resolution for both (including 4K video). That alone is worth $10-20 per month depending on service.

My iPhone 5s includes a fingerprint scanner in the lower front of the phone to wake and unlock the phone. The Pixel makes this process more convenient and places the scanner on the back of the phone, as shown in the image below, where an index finger naturally rests when you pick the phone. 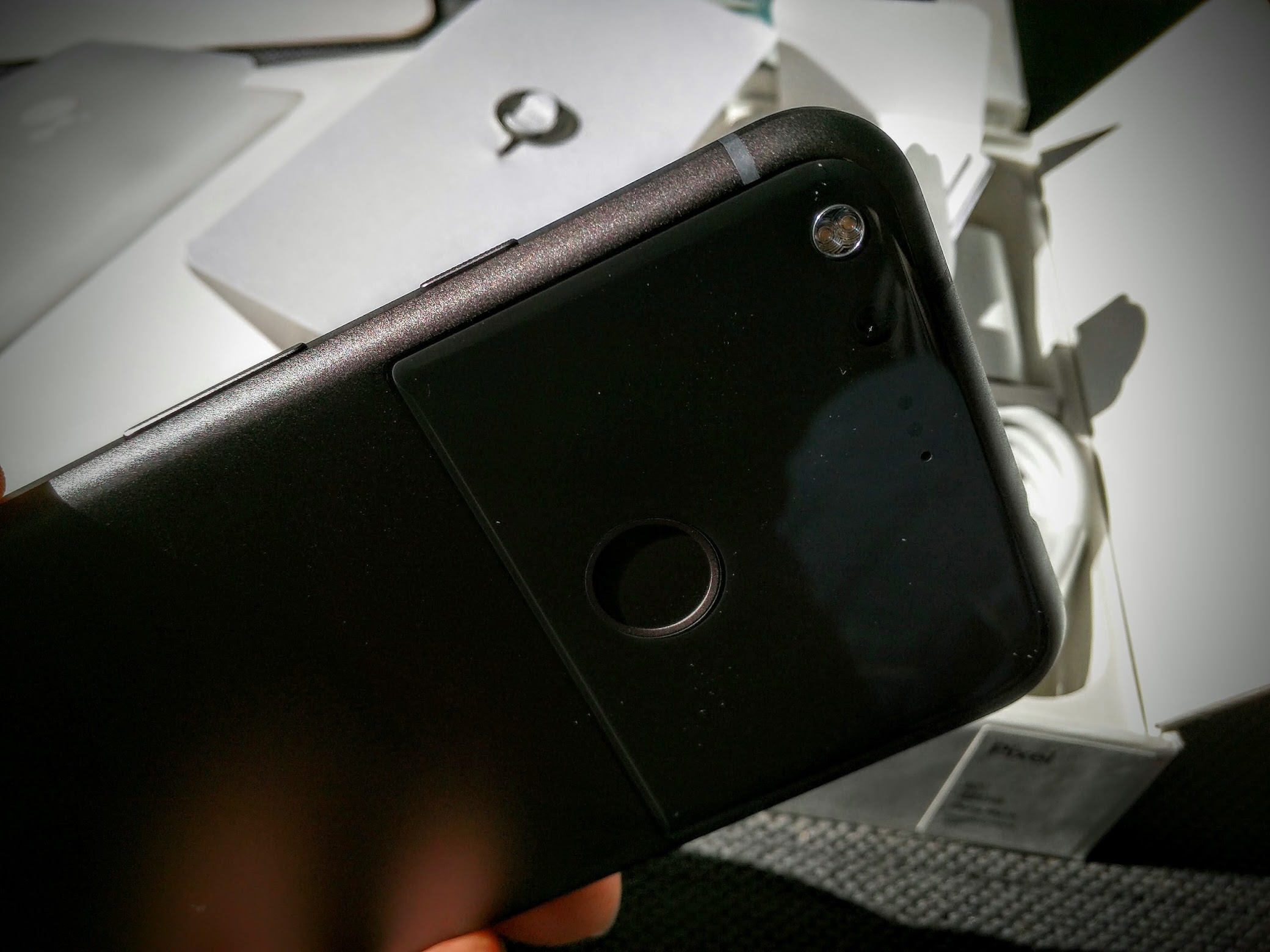 The Pixel uses the new Pixel Launcher (exclusive to the Pixel). This an upgrade to the Google Now Launcher used on the Nexus 6. Features include:

And my new favorite features:

I look forward to future versions and refinements to the Pixel Launcher. It is an improvement from the Nexus launcher and for me, decreases the need for me to look at third party launchers.

While we use our mobile phones for other tasks besides communication, the Pixel provides many tools to enhance device communication. Unfortunately, this is not where the Pixel excels as you will read below.

Texting is a mess on the Pixel. Google provides three options and not one single solution is perfect.

The Pixel includes two video chat applications; Hangouts and Duo. Hangouts is still my go to application for video chats. Like Allo, Duo could be great. While the Duo application is available on both Android and iOS, I have no contacts who use this application. Time will tell if Duo becomes useful.

The phone application for Android is good. The large interface elements make usage quick and easy. If Google can identify the phone number’s originator, it will display that information on screen before and during your call. If you want to save the contact, all that information scraped into the call is added to the contact card.

Hold, mute, conferencing and call forwarding are easy to access and intuitive. Two taps is all it takes to export a call log. Unlike iOS, the phone interface (and all other communication apps listed in this section) is an actual application. Google can send updates to the application through the Google Play Store without an upgrade to the phone OS. While I don’t use the phone often, I do appreciate the extra attention to detail that Google takes to provide a good voice experience.

I’ve not seen much difference between Google Assistant and Google Now other than the way you access the feature. It could be my uses are simple and I need to explore the capabilities further. As I spend more time with Google Assistant, I’ll be sure to update this section. For now, it’s a nice feature to launch applications, ask about the weather, begin navigation and set reminders.

Although the Pixel is $250 more than the Nexus 6, it feels like a premium phone. Additional value comes from the pure Google Android experience. The Pixel does not include carrier adware or bloatware. Updates come straight from Google on a regular basis and are not subject to carrier approval. As I mentioned earlier, full resolution uploads of photos and video to Google Photos is free. There is a lot of value in this phone and it’s eco-system.

The move from the Nexus 6 to the Google Pixel was more dramatic than expected. After several weeks of use, I appreciate the power, flexibility and stability of this new Android device. This was Android’s last chance for me. Had the Pixel not been a solid device, I was most likely going back to an iPhone in a couple of years.

Google has restored my faith in their mobile operating system and their ability to create a premium mobile phone. The battle within the premium smartphone space just got interesting. The Pixel is a fabulous first attempt by Google to produce a premium, Google branded, phone. I likely will want to upgrade to the next release of the phone (because I always do) but will not due to the now high cost of the phone.

Apple now has a true competitor for the premium smartphone category. Could the Android tablet market be next? Or how about that Chromebook market? Rumor has it, ChromeOS and Android will soon merge. This will create another interesting device to compete with macOS and iOS.

If you have any questions, find errors, or would like to leave a thought, please use the comments section below.