As part of my Commodore Plus/4 series, chapter three, of the user’s manual, includes a sections on using a datasette and a disk drive. In a previous post, I created the modern replacement for the disk drive, now it’s time to create a datasette replacement called, the Tapuino.

“What’s a Tapuino,” you ask? It’s an Arduino-based modern replacement for the Commodore Datasette. For this project, the inexpensive Arduino Nano version along with some easy to source electronic components. You can learn all about the Tapuino on the Sweetlilmre’s 1337 beef: Building the Tapuino R2 blog post.

NOTE: While this post focuses on the Tapuino for a Commodore Plus/4, this build will also work with a C16 or other TED series Commodore computer. If you want to use the Tapuino with a VIC-20, C64, or C128, you only need to replace the 7 pin DIN connector with this C2N Power Adapter that will also allow you to tap power from those computers for other projects.

Sweetlilmre’s (Is that pronounced, “Sweet Lil Marie?”) original blog post was written in 2015 and things have changed since then. His build uses veroboard to mount the Tapuino components. I’m not going to use veroboard, but will only breadboard the Tapuino. Later on, I will my working Tapuino to a solderable breadboard and create a custom 3D printed case.

This post and the companion video will include updates to build materials, layout, imagery, parts sourcing, and processes. Before you read this blog post, I recommend you watch the video below. It shares my build process and first use of the Tapuino. Hopefully you will also have a little fun along the way.

YouTube Video: retroCombs: The Tapuino Project - Build an Arduino powered datasette clone for the Commodore Plus/4

In the video below, I breadboard and operate a Tapuino:

Let’s get this project started by listing all the materials necessary.

The list below includes everything you need and the most convenient way I’ve found to source the items. The problem is that you simply can’t purchase some items as a single unit and will end up with extras. Not a problem for someone like me who has several projects on the bench at a time, but if you want the cheapest way to a Tapuino, I recommend you purchase a kit or a completed unit.

Makers or electronic hobbyist probably have many of these items (I did!) and only need to purchase one or two of the items above. I did splurge for this project with the purchase of the multi-color momentary switches and the all-in-one LCD display with I2C backpack (I had them as separate items). I did not have a 4n25 optocoupler.

The first step in my process was to use a regular breadboard to build the Tapuino based on Sweetlilmre’s original Fritzing file, as shown below: 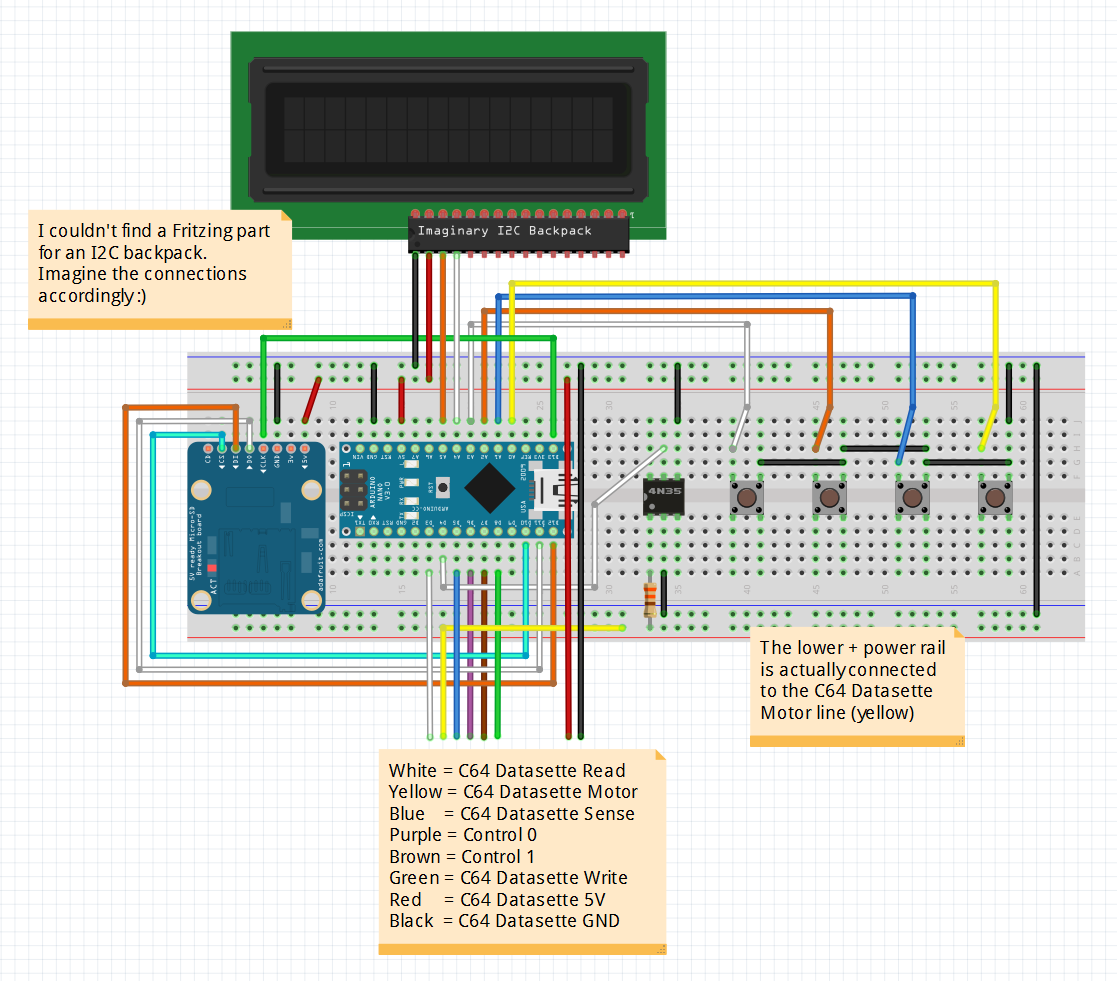 Afterward, I played around with the layout to streamline, and or, update part locations. Very little changed from the original because it was already efficient; however, I was able to locate updated Fritzing parts and took a different approach to labeling the cable connection. A Fritzing image of my layout is below as well as a download link for the original .fzz file.

Building the Tapuino is demonstrated extensively in the video; however, below are additional thoughts and tips:

That concludes my additional tips and thoughts. I’ll add others as I think of them or use the Tapuino. Additions will be date-stamped. Leave comments below if you think I should include other comments or have questions.

While I could include these in comments in the section above, this inclusion was substantial enough to warrant its own section. First, a shout-out to AWSM.de for providing this wonderful tape connector conversion reference image:

I originally tried to use another diagram from another site and found after a first attempt, I wired the cable incorrectly. Everything was mirrored. I discovered the error when I noticed that the Tapuino powered on, but the display was blank. When I placed a volt/ohm meter on the breadboard positive and ground rails, I discovered the Commodore Plus/4 was sending -5v to the Tapuino. Aha!

When I fixed the polarity, by swapping the wires on the rails, the Tapuino display was correct but the unit wasn’t working properly. It would recognize the Tapuino trying to send or save a Plus/4 program, but it would never release the Plus/4. That led me to believe that there were other incorrect connections.

After a few check against the image above, I found all the connections, minus the sense pin, were mirrored. The good news, I didn’t have desolder the connector or the wires on the header pins. I slipped the pins out of the header and reordered them. “Presto-changeo!”

This is another process that deserves its own section. Once the Tapuino is built, it’s a simple matter to download and install. I demonstrate each step in the accompanying video; however, below are the steps and additional thoughts and tips:

You will need the smallest microSD card you can find. I only had a 32Gb card and this is overkill! If I could find a 1, 2, 4, 8, or 16 that would be fine, but you can’t even purchase them in these configurations!

Format the card as FAT32. You can place directories on the microSD but keep them 16 characters or less and the shorter the better. In my demonstration, I have a games folder with three .tap files with long names. The Tapuino will scroll longer file and folder names.

UPDATE 2020-07-22: The animated .gif below is a short “copying .tap files to the microSD card” demonstration:

When you save a file from a Commodore computer using the SAVE command, the Tapuino will create its own recordings folder. As far as I know, there is no way to delete these files from the Commodore computer. You will need to remove the microSD and perform that function on a computer.

Looking for Plus/4 .tap files? I recommend Plus4world’s tape index. I would imagine any program released on cassette is archived but be careful, you have to select the right video version (PAL or NTSC). PAL specific programs will not work on an NTSC computer and vice-versa. And that’s a real problem. If you own an NTSC Plus/4, like I do, you will find that you can’t enjoy the majority of Plus/4 games. Most titles were PAL only since the computer was more popular across the pond.

You can now turn on power to the computer and that will also power the Tapuino.

The Tapuino includes four buttons to navigate the Tapuino interface as shown in the table below:

To display the contents of a directory, navigate to the directory and push button 1 (Select). If you need to stop a program from saving or loading on the Tapuino, you can push button 2 (Abort). The navigation is intuitive after a few uses.

On an early drawing of a custom case I am designing, I have these buttons labeled. I’m not sure that is necessary, but it will be helpful for new users.

NOTE: One menu item on the Tapuino you must visit in order to use with a Plus/4 is Options / Machine / C16. This configures the Tapuino to act as a 1531 Datasette. I’ve not found what this option does to make the Tapuino operate differently. If anyone know, please drop a comment below.

I LOVE this project so much. It hits all my favorite hobby ticks; Commodore retro-computing, physical computing, and electronics kits. With the Tapuino built, it will also get to my next favorite hobbies of 3D modeling and printing as I design and build a custom case for my Tapuino. Stay tuned for that post and video.

I’m not sure how often I will use the Tapuino since the Pi1541 is faster, but if there is a random .tap file out there, at least I know I can load it. With the Tapuino, I can also return to my Plus/4 User’s Manual series since I can finally cover chapter 3 which requires a cartridge, disk drive, and datasette.

Huge thanks to Sweetlilmre for the original instructions. This would not have been possible with our his/her amazing original work. I hope I have added something to the build!